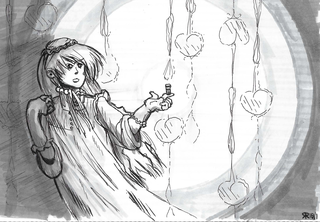 INKTOBER GUYS WHY NOT I've never technically done it before even though I ink regularly, let's see how it goes!

Had a rough time inking with just the smallest nib drafting pen, honestly it still wasn't fine enough and STILL clogged. But I also still don't have many other inks that won't run with copics. Guess there's plenty of days left to keep experimenting?

I had a couple ideas about the prompt "poison", made myself do the requisite 3 thumbnails that my art teacher used to require XD Glad I did, though - the first one was boring, the second one was safe, and this one put me outside my comfort zone. Which is part of the point of the inktober exercise imho, drawing stuff you're not necessarily used to, stuff you wouldn't draw otherwise.

Super inspired by the victorian farm show I watched at my sissypoo's this weekend OBVIOUSLY, I have rarely drawn this many ruffles and never mitts and a cap! Not my favorite style, but awesome as a change of pace from military jackets and knee-high boots. ALSO that wallpaper, I had such high hopes for it, it was supposed to be a slightly-too-sexual x high Victorian print, with a finely-drawn decorative botanical look based on the shape of a sprouting coco de mer. AMBITIONS, I had them! I still have them.

I will say I have learned from past mistakes where I get very excited about decorative elements and they end up overshadowing the main content. We've erred a bit too far in the opposite direction here, BUT on the other hand I did time-box myself to an hour. Pretty good for that if I do say so myself!

OH ALSO I got my business debit card, HUZZAH and also scary. I want to buy a bunch of art supplies because OF COURSE, but also I kind of do also need some and have been putting it off bc I didn't have the business running yet. WELP, now I get the extreme and kind of freaky pleasure of buying art supplies FOR WORK. It's crazy.